A simple reading and prayers for this Holy Friday

From The Bible Retold and Prayers and Verses

Please feel free to use any of my material that helps you, saying where it is from 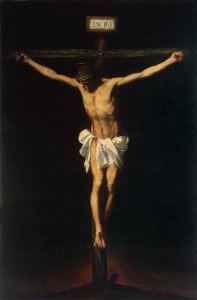 Jesus stumbled under the heavy wooden cross, weak from his beating, and so the soldiers seized Simon, a visitor from Cyrene in north Africa, and gave him the cross to carry.  Jesus followed slowly over the rough, hard road.

A large crowd followed, and among them were many women, sobbing.  He turned to them and said, “Daughters of Jerusalem, do not weep for me. You and your children will know enough pain.”

Two other men were led out to be crucified with Jesus at Golgotha, the Place of the Skull: one on his left, and one on his right.  So Jesus was nailed to the cross, and a sign was hung above him, saying: “This is the King of the Jews.”
From the cross, Jesus spoke slowly, painfully. “Father, forgive them, for they do not know what they are doing.”

But some among the crowd sneered “Save yourself if you are God’s Chosen One. You saved others!”

The soldiers joined in, as did one of the men being crucified. But the other said, “Don’t you fear God, at the hour of your death?  We are guilty, but this man has done nothing wrong.”  He turned his head towards Jesus.  “Jesus, remember me when you come into your kingdom!”

And Jesus answered “Today, you will be with me in paradise.”

Then, a deep darkness came over the land, and the shadows spread and joined together.  In the Temple, the curtain that hid the holiest place was torn in two.  “Father, take my spirit!” Jesus called in a loud voice, and then his head fell forward, and his breath stopped.

The Roman centurion at the foot of the cross said, “Surely this was a good man.”  And many of the crowd were overcome by sadness, and turned away.  But those who knew him, men and women, stayed, and kept watch.

Joseph of Arimathea, a secret follower of Jesus, went to see Pilate. “I request permission to bury Jesus,” he said, and Pilate gave him the body.  So Joseph and Nicodemus, the man who had visited Jesus at night, took Jesus away.  Nicodemus had brought a great weight of spices – myrrh and aloes – and together the two men prepared Jesus’ body with the spices and wrapped it in linen.  Then they carried him to Joseph’s garden tomb, cut into the rock, and there they laid him. They rolled the stone over the entrance, shutting out the last red rays of light. Then they turned, and walked away. But Mary Magdalene, who had been healed by Jesus, and the other Mary, stayed and kept watch in the chill of the deepening shadows.

Jesus, who walked to the cross,
be with us when we feel abandoned.

Jesus, who walked to the cross,
be with us when we face danger.

Jesus, who walked to the cross,
be with us when we are suffering.

When sorrow threatens to defeat us,
Jesus, who rose from the dead, be with us.

Come, O Joy:
Let heaven break into my dark night of sorrow
like the early dawn of a summer morning.

Bless you this Easter

One thought on “Good Friday Retold”