Part of the Sunday Retold series, based on the readings some churches follow.
This week it’s

Please feel free to use any of my material that helps you, saying where it is from.

We are preparing to enter the season of Passiontide, towards the end of Lent when we turn our attention more fully to the coming of Easter.  This strange and powerful story is at such a  turn in John’s Gospel, a turn of the road that will take Jesus through death and into life.  We have had hints of what will come before, but this is something much more significant, which attracts much more attention. Crowds pour out of Jerusalem to see Jesus, and Lazarus, and the religious leaders are afraid, and their resolve to be rid of him hardens.

Jesus is now close to Bethany, when Martha, Lazarus’ sister, comes out to meet him.

“Lord, if you had been here, my brother would not have died,”  she says, the same phrase  Mary uses later.  They have such confidence that Jesus would have healed their brother, if he had been there.  Then, Martha continues….”But even now I know that God will give you whatever you ask of him.”

Martha’s confidence in Jesus seems to hold even in the face of his delays, and her brother’s death.  We do not know what she expected might happen – maybe she didn’t know herself, speaking in fresh raw grief.  Perhaps she was simply throwing her whole self, her whole confidence and trust, on this dear friend who was unlike anyone else she knew.
“Your brother will rise again”
“I know he will rise again in the resurrection on the last day.”
To Martha, this talk of rising may have sounded like a conventional consolation, and  Martha takes it up, this hope, and places it on the Last Day, a day when the dead will rise. It is hope that death is not the end.  It is a distant hope, though, for a distant future.
“I am the resurrection and the life.”   Jesus moves that distant hope – a time, an event, a particular future thing, and says this instead:  He is the resurrection and the life .  Now.
In him is life.

Jesus is more than the one who rises from the dead on Easter Sunday, for others to look on and marvel, and believe if they can.  He himself  is resurrection, and that means something transformative for Lazarus, and Martha, and Mary, and all of us.

After Martha makes her extraordinary statement, she quickly moves on.  Her sister, Mary, is still shut inside.  She must be told that Jesus is here.

Jesus  meets Mary, and the raw grief that she and the others bring with them.  She says the same thing as her sister –
“Lord, if you had been here, my brother would not have died.”  She says it weeping.  She says no more words beyond these.  The tone, therefore, feels different.  Her words sound desperate, almost accusing.  Maybe they are accusing.

“Where have you laid him?”
“Come and see”

The pain of the moment now is overwhelming.  Jesus is described as being greatly disturbed, deeply moved.  There is no talk here of denying the hope of the resurrection by grieving.  No accusation of lack of faith for being overcome with emotion.  Grief here is fully experienced – for his friend, and for those who love him still.  Grief too for all the death and loss that are caught up in this, and in the death that Jesus himself will face very soon…..

Jesus moves to stand by the grave with those who weep, and weeps too.

Perhaps we can learn from this “come and see”, to invite Jesus into the darkest places in us.  It is the same phrase Jesus uses to answer “Where are you staying?” right at the beginning, inviting Andrew and another to follow him (1:35-39).

He will follow us too, even to the grave of one we love.

Jesus followed the road on towards Jerusalem, stopping at the desert place by the Jordan where John had baptized him: where the sky had opened and the Spirit had come down like a dove.  Many people came to him there, and many believed.  While he was by the Jordan, a messenger arrived.
“Teacher, I bring word from Martha and Mary of Bethany.  Your dear friend, their brother Lazarus, is very ill.”
“This sickness will not end in death, but in God’s glory!” Jesus replied.  But he did not follow the messenger back.   Two days later, he stood up and turned to his disciples.
“Come on, let’s go!” he said.  But they were afraid to go so close to Jerusalem, remembering how Jesus’ life was in danger there.
He stepped forward into the sun-baked road. “Now it’s daylight.  Lazarus is asleep, and I’m going to wake him up!”  And the disciples followed Jesus despite their fears.

As they came close, they saw Martha running towards them.  “Lord,” she called out, “if you had been here, my brother would not have died.” Sobbing shook her as Jesus stepped towards her, steadying her. “But I know,” she carried on, quietly, “even now, God would do anything you asked.”
“Your brother will rise again,” Jesus said.
“Yes, I know, on the Last Day – the day of resurrection, of new life.”
“I am the resurrection, I am the life.  Whoever believes in me will live, and will never be swallowed up by the dark emptiness of death. Do you believe this?”
“Yes, Lord, I believe you are the Christ, the Son of God, who was promised from long ago!”  Then she went back to find Mary.
“Sister, the Teacher is here!”  Straight away Mary got up and went out, followed by those who had come to mourn with her.  She went up to Jesus and fell weeping at his feet. “Lord!” she said. “If you had been here, my brother would not have died!”   Jesus saw her sorrow, and looked at those around, draped in black, and weeping. And he, too, shuddered under the heavy weight of grief.  “Where is he?”  Jesus asked.
“Come and see, Lord,” they answered. And Jesus wept. “See how he loved him!” said some.

“Could he not then have saved him?” questioned others.

They came before the tomb – a cave with a stone rolled across the entrance.
“Take away the stone!” Jesus said, but Martha hesitated.
“Lord, he has been dead four days.  The body will smell,” she said.

“If you believe, you will see God’s glory!” Jesus answered, and they rolled the stone away.  He prayed in a loud voice, and then, he looked into the deep darkness of the tomb. “Lazarus, come out!” he called.  And Lazarus came out, wrapped in linen grave clothes, with a cloth around his face. “Set him free from his grave clothes!”  Jesus said to those around him, who stared in astonishment as the man they had been mourning stood before them, alive again.

From The Bible Retold 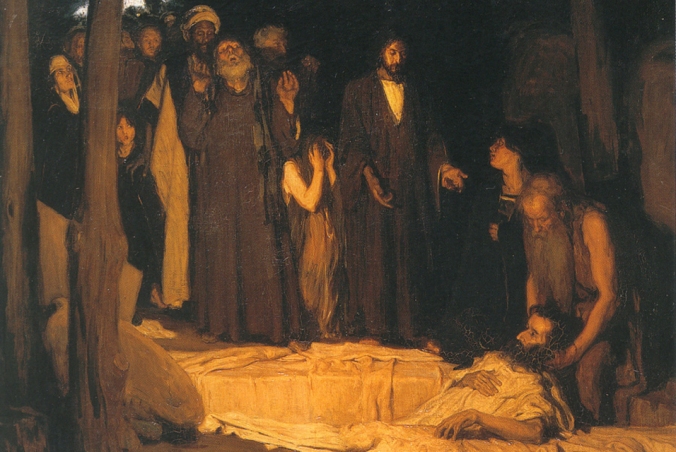 What would it mean to be a resurrection people?

To follow Jesus into this experience too? To participate with Jesus in this walk down to the darkest, deadest places, and participate in this bringing of life and hope,  of making things new.  To be part of the new heavens and new earth, to pray and work for his kingdom to come now, on earth, as it is in heaven.  Is it possible to move from discussion of the meaning of resurrection, important as that is,  to beginning to practice it, to live as if it were the way things were meant to be and were becoming?  In any experience of darkness, perhaps we can take courage  to walk through the valleys of the shadows (Psalm 23), to not be afraid, to trust there is a way out the other side.  And, when we are ready,  to look up, to look for signs of light, and life.

Here is a poem, one of a series.  You can find the first, and follow them through,  here

Mary, sister of Lazarus, at your feet a second time

She sits in the shuttered room,
the room where her brother had laid,
dying, dead, the messengers sent out
returning empty, with no reply,
like prayers that bounce  off ceilings
or stick to the roof of the mouth,
choking with sorrow.
When you stay by the Jordan
that shuttered room is where Mary stays.

This is her shadowed valley, the dark forest of her path,
foreshadowing yours, it is all foreshadowing you.
The room where her brother had laid,
how can she ever leave it now?

But leave she did, at last, when you called for her,
she came quickly, running, trailing darkness behind
her weeping.  Mary, once more at your feet,
and when you saw her weeping, you wept too.

You know us in our grief.  You come to us, call to us.
In our darkest, most shuttered places,
your spirit moves, breaks with ours.
Death lay heavy upon you, too, and all the sooner for
this, what you do now, standing before that tomb.

For now, you who are Life,
Word made warm and beating flesh,
and weeping,
call Lazarus out,
You, who are life, and will rise,
call out one who is dead from the cold tomb.
You watch as they run to free him from the graveclothes,
pull darkness from him, calling in strange bewildered delight,
and you see Mary’s face as she sees now,
her brother, who was dead, once more in light,
astonished, seeing your glory, part of your glory,
as she weeps again, is weeping again
breathless with joy.you staying, right at the beginning, inviting Andrew and another to follow him(

Come, O Joy:
Let heaven break into my dark night of sorrow
like the early dawn of a summer morning.

From Prayers and Verses